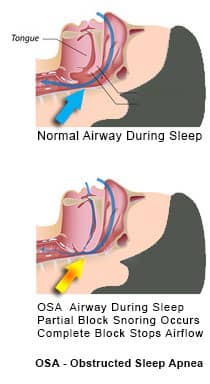 Obstructive Sleep Apnea is a common sleep disorder in which your breathing temporarily stops during sleep as a result of blockage in the upper airways. As the body struggles to breathe, it often creates very loud snoring noises while gasping for air. These sleep interruptions lead to frequent awakenings that most people may be unaware of resulting in fatigue. Sleep apnea is a serious and potentially life threatening sleep disorder. According to the Mayo Clinic, about 90 million Americans suffer from snoring and as many as half of those may be suffering from Obstructive Sleep Apnea (OSA).

It is important to see a doctor right away!

Sleep apnea in children can cause hyperactivity, poor school performance, and hostile behavior. Children who have sleep apnea also may breathe through the mouth instead of the nose.

Signs and Common Symptoms of Obstructive Sleep Apnea include:

The four types of Sleep Apnea are:

Obstructive Sleep Apnea is caused when soft tissue in the airway relaxes. Usually, OSA occurs because of changes in muscle tone, an increase in the soft tissue due to obesity, and structure issues with the skull and face. Obese people are at a great risk for OSA because they carry more muscle and tissue mass. Over 50 percent of people with Down's syndrome also suffer from OSA. Nasal congestion and alcohol consumption can also contribute to OSA. In children, enlarged adenoids and tonsils are the most common causes of Obstructive Sleep Apnea. OSA can also occur as a part of the aging process. The brain's efficiency in transmitting signals that maintain rigidity to the throat muscles decreases with age.

The Importance of Sleep Apnea Treatment

Complications from sleep apnea can include inattentiveness at work, tiredness, risk of accidents, mood swings, high blood pressure and erectile dysfunction. Sleep apnea also increases the risk of congestive heart failure and stroke. Children affected by sleep apnea can be hyperactive, high strung, aggressive, and prone to bed-wetting. They may have also unusual sleeping positions. Overall, a person suffering from sleep apnea experiences deterioration in the quality of life.

To properly diagnose sleep apnea, a dentist or physician will have diagnostic sleep testing performed for the patient, especially if one is suffering from conditions such as high blood pressure, heart failure, and epilepsy. Physical examination for adults includes measuring for a wide neck, looking for enlarged tonsils, and assessing upper body obesity. In evaluating children, doctors check for enlarged adenoids and determine if the child has attention deficit issues.

Doctors use the patient's medical and sleep history in diagnosing sleep apnea. Symptoms such as drowsiness, headaches, heartburn, and patient medications can influence the diagnosis. A sleep study, where the patient is monitored in a sleep lab, can also help determine an individual has sleep apnea. When testing rules out sleep apnea, then the patient must be evaluated for other potential sleep disorders.

After a diagnosis of sleep apnea, Dr. Vermani will review treatment surgical and non-surgical options. Non-surgical treatments include medications, behavioral changes, dental appliances, and use of a Continuous Positive Airway Pressure (CPAP).